The St. Louis Sharks and Hesperia Panthers kicked off in Week 2, as both clubs entered with different momentum. St. Louis had defeated Calvin Christian, while Hesperia lost their opener to Manton. Those trends would continue for another week, as the Sharks won 39-18 on Thursday night.

Ignatius Jackson got things started for St. Louis with a 13-yard touchdown run. Later in the first quarter, after Hesperia had evened the score, Jackson got loose once again. This time, he sprung free for a 20-yard touchdown that gave the Sharks a 14-6 lead.

Hesperia would jump ahead in the second quarter, with a pair of short touchdown runs. That would be short-lived, however, as Reece Giles was able to power across the goal line for a score. The failed conversion left the Sharks ahead 20-18.

After a scoreless third quarter, St. Louis put on the afterburners offensively in the fourth quarter. Ignatius Jackson started things with a 38-yard run to the endzone, and he followed that up with an 82-yard punt return touchdown. Reece Giles wrapped up the scoring with a short run.

Brandon Quinn led Hesperia with 160 rushing yards on 24 carries. He had a rushing touchdown, as did Amando Escobejo and Hunter Billman. Sam Koch led the Hesperia defense with eight tackles.

Next week, St. Louis will take on Saginaw Michigan Lutheran Seminary in TVC West II play. Hesperia will kick off CSAA-Silver action in their date with White Cloud. 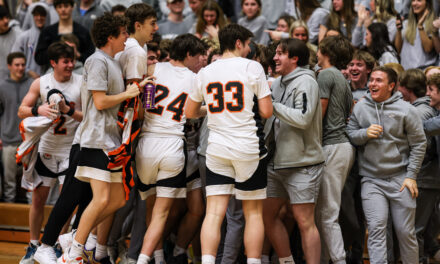