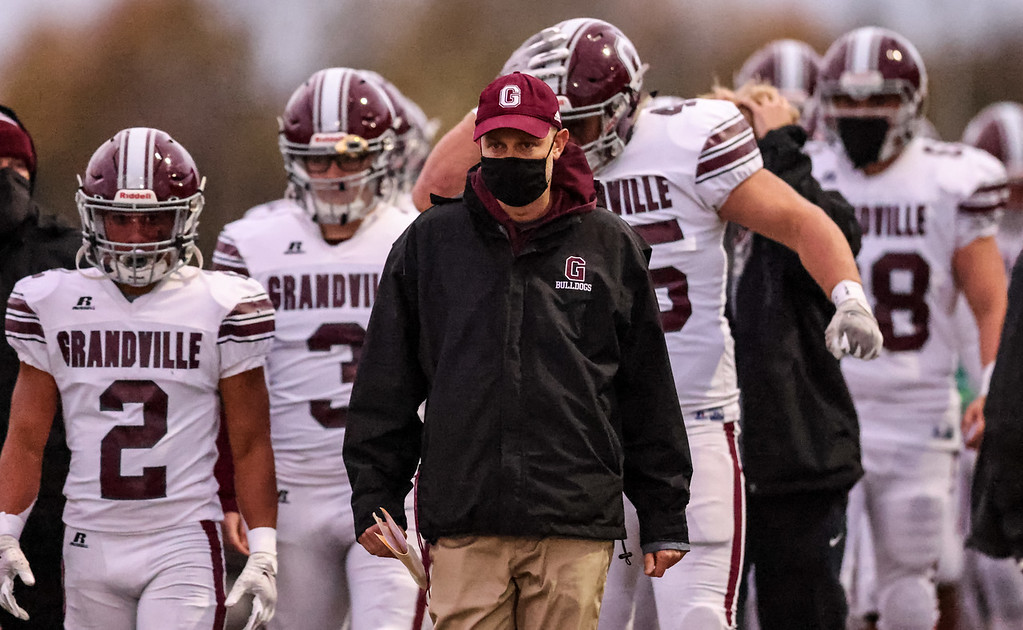 The Grandville Bulldogs were back at home for their second playoff game of 2020. They hosted Traverse City West, who made the long trek downstate after beating Grand Rapids Union six days ago. Grandville was in complete control throughout this contest, a 35-0 shutout.

Marcel Love got the scoring started for Grandville with a fifty-yard sprint to the end zone. The Bulldogs made the two-point conversion and took an early 8-0 lead. This would be the lone touchdown of the first quarter.

In the second quarter, Grandville wasted no time in finding the end zone. Seventy-five seconds into the quarter, Marcel Love struck again. He powered his way across the goal line for a touchdown to extend the lead to 16-0 when the Bulldogs got yet another conversion.

After a successful punt return brought the football close to midfield, Grandville had a great opportunity to score once again. Cam Terry joined the end zone party with a thirty-nine yard sprint to the end zone to put Grandville ahead 22-0. Before the half would end, Terry had another explosive rush that covered fifty-two yards on his way to the end zone. Grandville took their 28-0 lead into the half.

Grandville’s final touchdown came midway through the third quarter. They went on a seventy-nine yard march to the end zone that was spearheaded by two big plays. First, Marcel Love broke off a fifty-five yard touchdown run. Shortly after, Cam Terry found the end zone from thirteen yards out, his third score of the day. Grandville booted the extra point to enact the running clock.

With the victory, Grandville is headed to the district finals. Next Friday, they will hit the road to take on OK Red foe Rockford. The Rams and Bulldogs met in the regular season finale and Rockford captured the conference title in a 28-8 victory. Grandville will look to avenge the defeat and come away with the more crucial hardware this week.

Listen to Grand Rapids Christian in the Semifinals Live on MSR!