The Freeland Falcons are the #1 team in their Division 5 district. They hosted their playoff opener on Friday, as the Valley Lutheran Chargers came to town. A barrage of early scores carried the Falcons to a 60-6 victory.

In the first quarter, Bryson Huckeby got things started with a three-yard touchdown run. On their next scoring drive, Garrett Pistro rumbled for a nine-yard score. Huckeby and Ben Wellnitz paired up for the two-point conversion to move the score to 14-0. Jacob Kundinger got in on the scoring action with a twelve-yard run to give Freeland a 21-0 edge after twelve minutes.

The second quarter saw Freeland pick up where they left off in the first. Bryson Huckeby and Easton Armstrong paired up for a twenty-yard touchdown pass in the opening minutes of the quarter. Valley Lutheran would score their lone touchdown of the game on a responding drive that was capped off by an Eli Frank touchdown dash of forty-three yards.

Freeland would find the endzone three more times before the end of the half. Kundinger rumbled back into the end zone with a two-yard score. Bryson Huckeby then used his legs for his third touchdown of the evening. Finally, Huckeby and Easton Armstrong partnered up once more for a fifteen-yard score. Freeland took a 46-6 halftime lead.

With a running clock in effect, Freeland was held to just three possessions in the second half. The first series lasted just one play, as Huckeby and Ben Wellnitz connected for a fifty-five yard touchdown pass. Their second drive was just two plays long, as Nolan Van Loo burst through the defense for a touchdown run.

The final Freeland possession was stopped by running the clock out, and it snapped a perfect game offensively. Prior to that series, Freeland scored on all nine of its possessions in this dominating victory.

Next week, Freeland will host Midland Bullock Creek in the district semifinals. The Lancers advanced after defeating Carrollton 27-6 on Friday night. 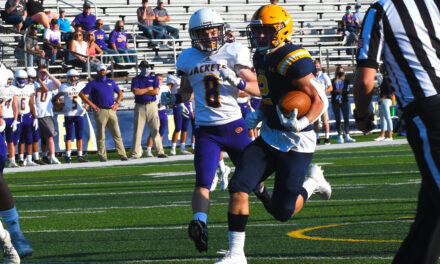