The Muskegon Catholic Central Crusaders rolled through the Lakes 8 Conference with a perfect record in league play, outscoring opponents 111-6. Two additional non-league wins brought the Crusaders to their season finale against Holton looking for an undefeated regular season. With a barrage of scoring plays, they accomplished that feat for the first time since 2016 with a 60-0 win over the Red Devils.

In the first quarter alone, MCC nearly put enough points on the board to reach the running clock (although that doesn’t go into effect until after halftime). They scored five touchdowns in the opening frame, racking up 34 points in the process. Tommy Kartes got things going with a three yard touchdown rush that put the team ahead 6-0.

The next three touchdowns in the first quarter all came off the arm of quarterback Max Price, the long of which was forty yards to Sam Convertini. He found Elliott Riegler and Dane Rutz on the other two scores. Before the quarter ended, Price used his legs for a sixty-seven yard sprint to the end zone.

Muskegon Catholic Central would go on to add another two scores in the second quarter to expand their lead. Joseph Waller broke free for a thirty-nine yard score in the first few minutes of the frame. In the latter half of the second quarter, Bailey Williams made it 46-0 Crusaders on a five-yard plunge. This lead would hold into the halftime break.

With the running clock in effect throughout the second half, the offensive possessions were limited for MCC. They still managed to score two touchdowns in the half. Kameron Willer scored on a one-yard plunge. Nick Powell scored the other touchdown in the fourth quarter when he ran in a one-yard touchdown of his own. This moved the game to its final tally of 60-0.

The Crusaders outgained Holton 331-26 in this contest. They flexed their muscles on both sides of the football, showing why they are one of Division 6’s best football teams.

Max Price was 3/4 passing in this game for 94 yards, and all three of his completions went for touchdowns. He added 77 yards on the ground, including his fourth touchdown. This effort earns him honors from Redi Rental as the Crusader of the Game. 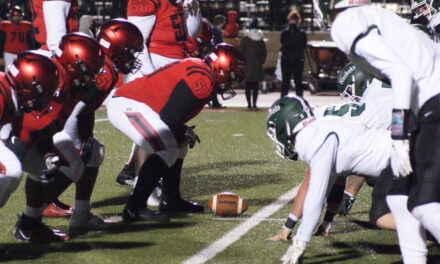