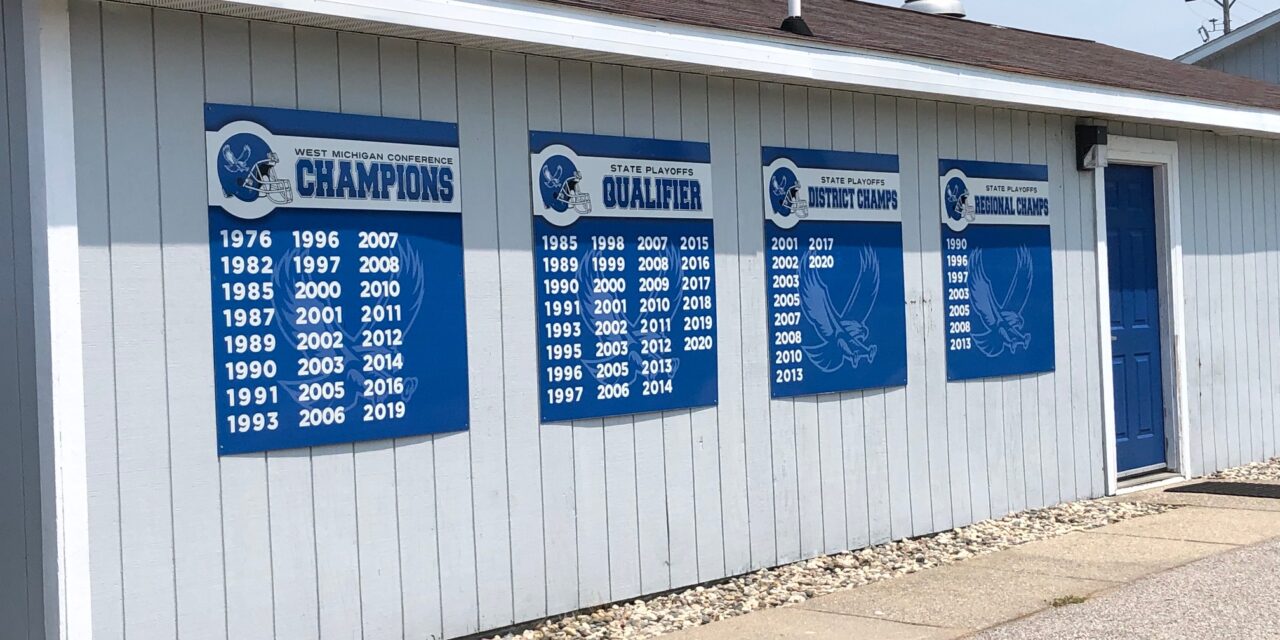 The Oakridge Eagles and Ravenna Bulldogs, two talented clubs in the West Michigan Conference, battled for four quarters on Friday night. A touchdown in the final minutes pushed Oakridge to victory, a 43-36 ballgame.

It was all Oakridge early in this game. The Eagles scored the first 22 points of the contest. On the opening kickoff, Brenden Raymond raced to the end zone for an 84-yard score. Trever Jones reeled off a lengthy touchdown sprint to extend the lead, a 73-yard score. Corey Vanderputte scored from five yards out, and a conversion pass from Matt Danicek gave Oakridge their 22-0 lead. Ravenna finally found the end zone with two seconds left, a 6-yard run by Kyle Beebe.

In the second quarter, it was all Eagles once again. Corey Vanderputte was the key cog in their offensive scheme, with two touchdowns. Two minutes into the frame, he ripped off a 46-yard score. With seven seconds left before half, he powered across the goal line from a yard out. This gave Oakridge a shocking 36-7 lead at halftime.

Ravenna would battle back in the third and fourth quarter, scoring twenty-nine unanswered points. In the third frame, Hunter Hogan contributed to both touchdowns. He used a 22-yard touchdown run to get the Bulldogs started. With seconds left in the quarter, Hogan found Grant Becklin on a 32-yard toss. This brought Ravenna within fifteen, 36-21.

The offensive run continued for the Bulldogs. Clay Schullo found the end zone on a 5-yard scamper. With five minutes to go, Hunter Hogan used his legs on a 54-yard keeper. He added the extra point, and the game was knotted at 36.

With fifty-four seconds to go, Oakridge found the end zone for the game-winning tally. Brenden Raymond, who finished with 97 yards in the game, powered across the goal line from three yards out.

Raymond was a part of the Oakridge attack that rushed for 405 yards. Corey Vanderputte led the way with 23 carries and 206 yards.

With this thrilling victory, Oakridge is now 7-1. They secure a share of the West Michigan Conference title with this victory, finishing in a three-way tie with Montague and Whitehall. This is the first conference title for Oakridge since their undefeated 2019 league campaign.

Next week, Oakridge will face Lakes 8 Champion Muskegon Catholic Central in a non-conference bout. Ravenna will conclude their regular season against Central Montcalm.