The Ravenna Bulldogs’ offense burst for a season high performance in Friday night’s win over the Hart Pirates. They scored 55 points and racked up 376 yards of offense in this win.

Five minutes into this one, Kyle Beebe got things rolling with a two-yard quarterback keeper. Hart would respond with a touchdown and two-point conversion of their own, and the Pirates held a brief 8-7 edge. Just twelve seconds of game time later, Beebe found Joel Emery for a fifty yard touchdown strike, putting the Bulldogs back ahead 14-8.

Ravenna would add twenty points in the second quarter to gain complete control of this contest. Beebe added his third touchdown, this time another keeper from thirteen yards. On their next possession, Thomas McCullough was able to run nine yards into the end zone for a touchdown. Finally, in the closing seconds of the half, Beebe found Joel Emery yet again, and this eight yard score made it 34-8 as the teams went to half.

The third quarter saw more of the same, as Ravenna added three touchdowns to their tally. The first two came on the legs of Beebe, as he ran six and eight yards respectively to the end zone. Finally, Hunter Hogan made his way across the goal line, as he toted the football eleven yards through the defense for the score.

Beebe finished the night 7/9 for 147 yards and two touchdowns. He also added 98 rushing yards and four more touchdowns on just eight carries. This performance earns him the Redi Rental Ravenna Bulldog of the Game. 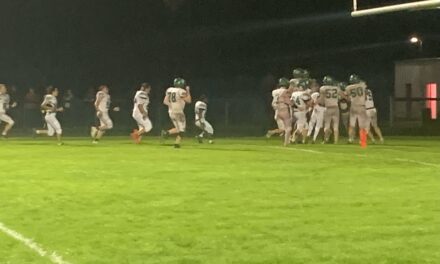