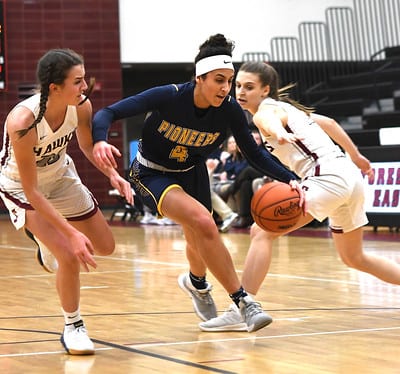 This week, our MSR team highlighted the play of five teams around the area. Their results, and the list of next week’s games are below:

The Hornets had a pair of games this week, and they split the decisions. On Tuesday night, they went up to Big Rapids and battled the Cardinals. In a hard fought, back and forth affair, Central Montcalm eventually came up short in a 41-36 defeat. Bailey Vissman led the team with 12 points, while Anna Loew and London Eldridge each had seven. On Friday night, Central Montcalm hosted Chippewa Hills. This game was over after the first quarter, as stifling defense gave the Hornets a 23-1 lead after the first eight minutes. In the 62-23 victory, once again Vissman led the team in scoring. She scored 18 points and added five steals. Maia Sexton added 12 points for the Hornets. This week, they have a pair of home games. On Tuesday, Reed City comes to town, and on Friday they host Tri-County

The Pioneers’ strong start continued with their victories this past week. On Tuesday night, they took down South Christian by a score of 60-41. Three days later, they took on Wayland in a battle for first place in the OK Gold. East showed why they are one of the best teams in the area, dominating the Wildcats 74-33. This win extended their winning streak to seven games, a mark they will try to extend by two this week. On Tuesday, EGR hosts Grand Rapids Christian, and on Friday they will pay Wyoming a visit for a road conference contest.

The Rangers won a pair of games this week to move to 7-3 on the season. On Tuesday night, they defeated Cedar Springs 48-39. Friday was more of the same, as they defeated Lowell 54-39. This victory was propelled by a 19-2 lead after the first quarter of play. It’s a big week this week for the Lady Rangers, as they will visit Ottawa Hills on Tuesday before hosting Forest Hills Northern, who is also undefeated in the OK White, on Friday night.

The Rams’ perfect season continued with a pair of victories this week. On Tuesday night, they had no problem defeating Caledonia, taking home a 57-28 win. Madi Kleefisch led all scorers with 15 points for Rockford in that victory. On Friday night, it was the same story as Rockford took down Grand Haven by a score of 60-25. Syd Reinke was the leading scorer for the Rams in that game with 13 points, while Elle Irwin added twelve. This week, the Rams will travel to East Kentwood on Tuesday before hosting undefeated Hudsonville on Friday.

This week, the two games the Sailors played did not go their ways. On Tuesday, they faced an extremely tough East Grand Rapids team, falling 60-41. The Pioneers are the team to beat in the OK Gold with their 9-1 record. On Friday, South Christian played a back and forth contest against Unity Christian. After falling behind by as many as ten points in the first half, South Christian cut the halftime deficit to just six. They continued to battle back, and they tied the game at 39 with just seconds to play. A basket by Unity’s Taryn Hinken gave the Crusaders the lead, and a last second three-point attempt by Sidney Vis grazed the rim but ultimately fell short. Vis was the leading scorer for South in defeat with 18 points. This week, the Sailors will visit Middleville on Tuesday before hosting Wayland on Friday.

Rockford’s Strong Second Half Leads to Win over East Kentwood