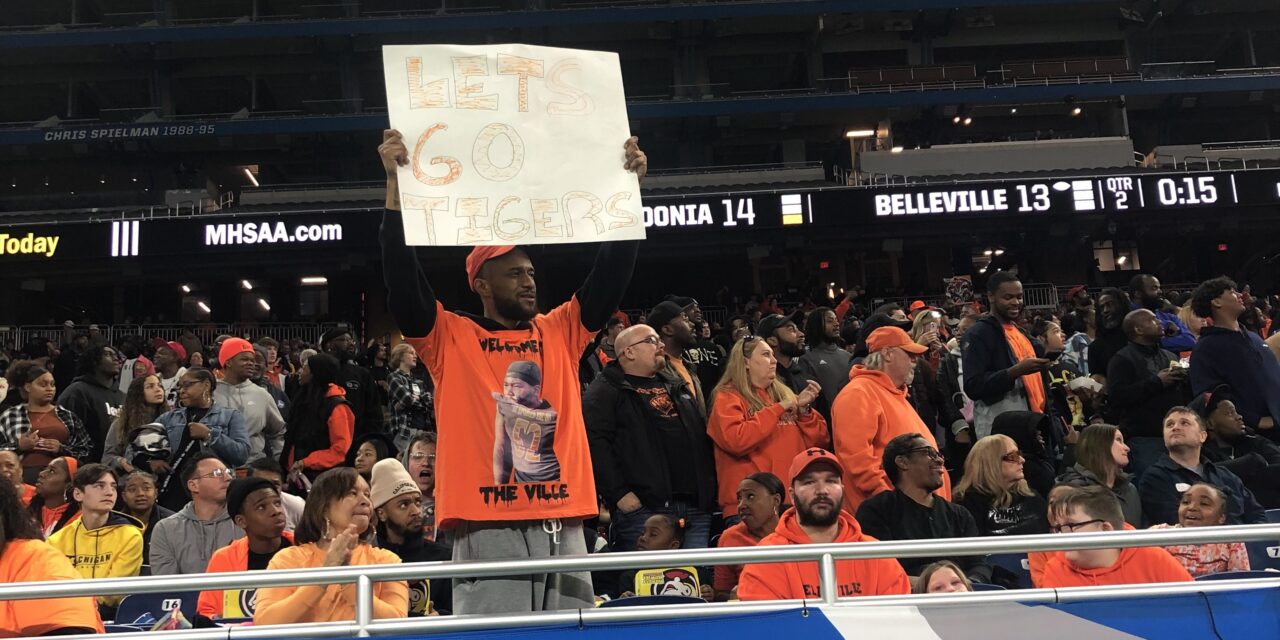 The Caledonia Fighting Scots felt like the Cinderella story in the 2022 MHSAA Football Playoffs. A team was the smallest in its division, losing just two students would have sent Caledonia to Division 2, the Fighting Scots surprised many with playoff wins over Grandville, Rockford, Grand Ledge and Clarkston. With four strong performances, they earned the school’s second trip to Ford Field (2005).

Their opponent? None other than Belleville, the heavyweight in Division 1. Led by 5-star 2025 Quarterback Bryce Underwood, this group entered the finals on a 24-game winning streak. They had their own challenges this postseason, losing their head coach Jermain Crowell due to MHSAA rules violations.

Caledonia fought and battled with the Tigers, but ultimately clock struck midnight on this fairytale season. Belleville used a strong second half to repeat as champions, 35-17.

Belleville elected to receive opening this game, and their drive stalled near midfield as a result of three penalties. Caledonia took over and delivered its first big punch. They covered 66 yards in seven plays, capped off by a 1-yard touchdown plunge by Brock Townsend.

The Tigers responded on the ensuing drive. They went 8- yards, with a 38-yard sprint to paydirt coming on the legs of tailback Colbey Reed.

Caledonia saw its offense march down the field again in the opening minute of the second quarter. A 27-yard run by Justice Reed had Caledonia down to the Tigers’ 18 yard line. An unfortunate tip interception by Adrian Walker froze the Fighting Scots in their tracks.

The next drive would be more successful for Caledonia, covering 61 yards in 8 plays. After a 33-yard run by Mason McKenzie, Townsend bowled across the goal line again from a yard out.

A pivotal sequence of plays took place in the final two minutes of the first half. Caledonia started at the Belleville 40 after a phenomenal punt return by Jimmie Floyd. Two plays later, Caledonia faced a third-and-one. A rushing attempt was stalled, leaving the Fighting Scots with fourth and four. In a play that Caledonia coach Derek Pennington described after the game as “the moment that changed the momentum”, Belleville shot through the line and Lamar Fairfax sacked McKenzie for a 13-yard loss.

Belleville would quickly work downfield, covering 53 yards in 57 seconds and 5 plays. Bryce Underwood had a pair of 20+ yard completions, and he capped off the drive with a laser to Adrian Walker. The teams would go into half in a 14-14 deadlock.

After the teams began the third quarter exchanging punts, Caledonia regained the lead. The Fighting Scots put together a complete drive, taking 12 plays to cover 60 yards, removing 5:25 off the game clock. They got down to the five yard line, but an incomplete pass on third down forced a field goal. Luke Vogler came on and booted the 22-yarder, giving Caledonia a 17-14 edge.

The ensuing Belleville drive saw the Tigers’ quick strike scheme work yet again. They needed just four plays to cover 80 yards. Bryce Underwood ripped off a 40-yard run, and Jeremiah Beasley finished the drive with a 36-yard touchdown sprint. As the fourth quarter began, Belleville had their first lead at 21-17.

Two plays into the fourth quarter, Caledonia had a decision to make. They were at their own 43 yard line, trailing by four and facing a fourth-and-one. Though there was some contemplation with the potent Belleville offense clicking on all cylinders, Pennington decided to punt it back to Belleville. “I trusted my box guys in that situation,” he shared. “They told me that if we don’t get that conversion, it was over giving them the ball in a short field.

This field position tactic appeared to work when Belleville faced fourth and two at their own 42 yard line. Interim head coach Dejuan Rogers sent his offense back on the field. He dialed up a play for Beasley, who shook off a tackle and picked up the conversion. On the ensuing play, Bryce Underwood broke free on a 48-yard touchdown run, giving the Tigers an 11-point edge.

After recording two stops, Belleville found the end zone again. Bryce Underwood found Mychal Yharbrough on a 25-yard touchdown toss, expanding the lead to its final tally of 18 points. Just for good measure, the Tigers’ Dennis Crawford would intercept McKenzie with 2:34 to play, ending any hopes of a Caledonia miracle.

Belleville outgained Caledonia 443-262 in this game. Bryce Underwood was the star of the show, finishing 15/25 passing for 155 and two scores, while also adding 149 rushing yards and a touchdown on 10 carries. “He’s a 5-star kid,” Pennington remarked after the game. Caledonia players added that he was “elusive”, “tough to bring down”, and he “had a rocket of an arm”. The proof was on full display today for why Underwood is one of the best in the 2025 class across the country. With him at the helm, the Tigers will continue to be a threat in Division 1, regardless of coach.

Caledonia senior quarterback Mason McKenzie ended 6/18 passing, racking up just 77 yards while tossing two interceptions. His presence was better felt on the ground, where he turned 23 carries into 134 yards. Afterwards, he was proud about how this team “put Caledonia back on the map”.

Despite suffering a tough defeat, Coach Pennington was extremely proud of the way his team played. “We had opportunities, and we just didn’t finish,” Pennington shared. “When you’re giving up fifty pounds a player up front, you need a bigger lead. In the end, they just wore us down with their size and physical play. Our guys gave everything they had today.”

Despite it being over 150 miles to Ford Field, Caledonia fans flocked to support their team. “That’s Caledonia,” Pennington praised when asked about the immense fan support. “Come to a home game sometime, it’s absolutely packed. Our fans are dedicated and passionate. They were behind us all day. This community loves its football team.”

It was a season to remember for Caledonia, who finishes 12-2. The 12 wins ties the 2005 team for the most in school history. Next year, they will need to replace Mason McKenzie at quarterback, but with skill players such as Brock Townsend and Derek Pennington Jr returning, as well as several other key contributors like Blake Herron, Cade Tidey, Jaxson Engelberg, and Maddox Greenfield returning, this program has a chance to continue to do something special in 2023. 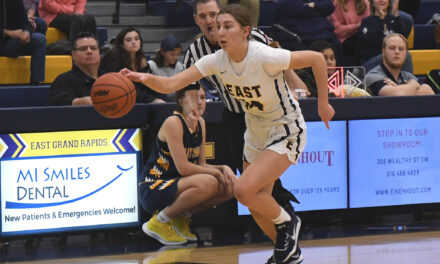