The Freeland Falcons came into Friday night on a tearing start. The Falcons have outscored their first two opponents 101-16. It has been a team that has dominated both lines of scrimmage. This has lead to a pounding run game, and a defense that has been nearly flawless. Bridgeport has started 0-2 on the year. After a close loss in week 1, the Bearcats took it on the chin a bit last week against Garber. This is one that really could have been monumental for them. Unfortunately for the Bearcats, the Falcons weren’t going to let that happen on their watch in week 3.

The Falcons would open the scoring in this one on a Nick Harrington 1-yard touchdown run. They would lead 7-0 to that point. That’s where it stood after one. The Bearcats couldn’t have asked for more heading into the 2nd as there was still a shot at keep this one alive.

Freeland would then take a 14-0 lead after a Sam Talaga 11-yard touchdown pass to Daniel Duley. It was a drive that took only 3 plays and accounted for 96 yards. Freeland would then start to open things up even more after a Talaga 5-yard touchdown run. This drive would take a little longer on 9 plays but the Falcons then found themselves up 21-0. Freeland would tack on another to continue the momentum when Duley would recover a fumble in the endzone. It would be 28-0 to that point and the Falcons were flying high into the half.

It wouldn’t get any better in the 3rd quarter for Bridgeport. Evan Casicek would find the endzone this time on a 4-yard touchdown run. Another successful PAT would make this a 35-0 lead for Freeland. This drive took only one play as Freeland was gifted great field position. The Falcons would find the endzone again in the 3rd, this the sixth time on the night. This time it would be Cole Jimkoski from 5-yards out. This would make it a 42-0 ball game, Freeland.

Bridgeport would finally be able to find the endzone in the 4th. Taybren Baldwin would connect with 6’4 Jonathan Jackson on a 14-yard touchdown pass. That would be it for the Bearcats on the night. Freeland would end the scoring as they tacked on Nathan Helmrich 1-yard touchdown run. 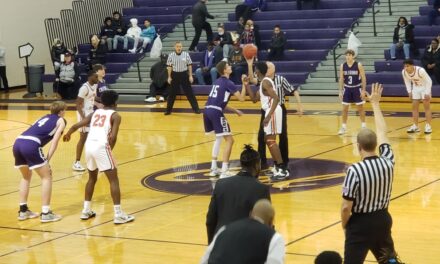