Garber took the opening drive of the game and marched down the field, scoring on a Caleb Christie 23-yard run. The extra point failed for the Dukes, leaving them ahead by just six points. On the ensuing Eagle drive, they fumbled on the first play and the Dukes had excellent field position. The Eagle defense stood tall, as Garber turned the ball over on downs.

Frankenmuth then went on a 14-play, 86-yard drive, culminating on the first play of the second quarter. Cole Jankowski scored on a 17-yard run, and Seth Malmo added the extra point to give the Eagles a 7-6 lead. With twenty seconds remaining in the opening half, Jankowski scored on a 2-yard run. As a result of the score, the Eagles took a 13-6 lead into halftime.

On the opening drive of the second half, the Eagles marched 80 yards on 12 plays with Cole Lindow scoring on a 5 yard run. Late in the third quarter, Frankenmuth threw an interception deep in their territory. The defense again made a big play when Jankowski intercepted a Dukes pass.

At the 11:23 mark of the 4th quarter, Lindow scored from 3 yards to up the lead to 27-6. On the ensuing Dukes possession, Floyd Atwood intercepted a pass and took it to the house, a 42-yard touchdown to extend the lead to twenty-seven points.

Jankowski would add his third score of the game midway through the final quarter on a 20-yard run. Malmo’s extra point upped the score to 40-6 in favor of the ‘Muth. Garber made one last attempt to score on a field goal try, but it was blocked by Jake Andrews. The Eagles’ offense gained 382 yards, all in the rushing department. Lindow led the way with 209 yards on 21 attempts. The Frankenmuth defense was led by Drew Titsworth with 7 tackles.

Frankenmuth will look for an undefeated regular season when they travel to New Lothrop for a non-conference game next Friday. Essexville Garber will take on Croswell-Lexington in a non-league bout. 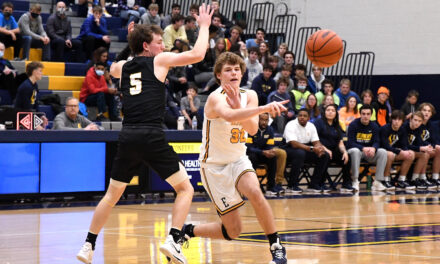