The Montague Wildcats had dominated their first seven opponents, outscoring the lot 358-56, and 31 of those points came in their overtime win over Whitehall. Outside of that game, Montague had won every game by four touchdowns. They can add another notch to that belt after their impressive display against Clare in a battle of unbeaten teams in the district semifinals.

Montague won this game in large part as a result of their tremendous start. The Wildcats got things going with a ten yard touchdown run by quarterback Drew Collins. They would follow that up with a forty-one yard burst by Dylan Everett. Collins would connect with Tugg Nichols from fourteen yards out to create a twenty-one point lead. Finally, the first quarter concluded with a safety recorded by the Montague defense to give the ‘Cats a 23-0 advantage.

Drew Collins once again used his legs, this time from eleven yards out, to push the lead to 30. Clare would finally find the end zone as Al Warner connected with Jon Bouchey for an eleven-yard touchdown pass. The Wildcats took this 30-7 lead to the locker room.

Montague would continue to score as the second half began. Drew Collins tossed his second touchdown pass of the game when he found Owen Petersen on a thirty-three yard toss. After Dylan Everett rushed for his second touchdown, Montague led 43-7, causing the running clock to go into effect.

In the final quarter, the Wildcats had one more scoring play. Andrew Kooi was in the game at quarterback, and he found Rodney Brassfield open down the field. Brassfield bolted down the field, through the Pioneers’ defense and into the end zone for a ninety-four yard touchdown pass.

Next week, Montague will travel to Muskegon Catholic Central to play for a district championship. The Wildcats and Crusaders are two of Division 6’s best teams, and many believe that the winner of this game will be the favorite to win the Division 6 title. 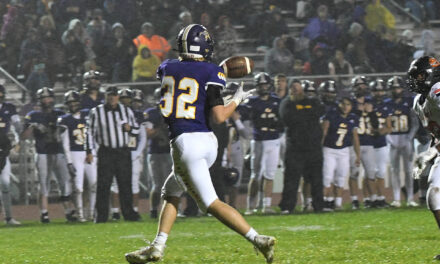