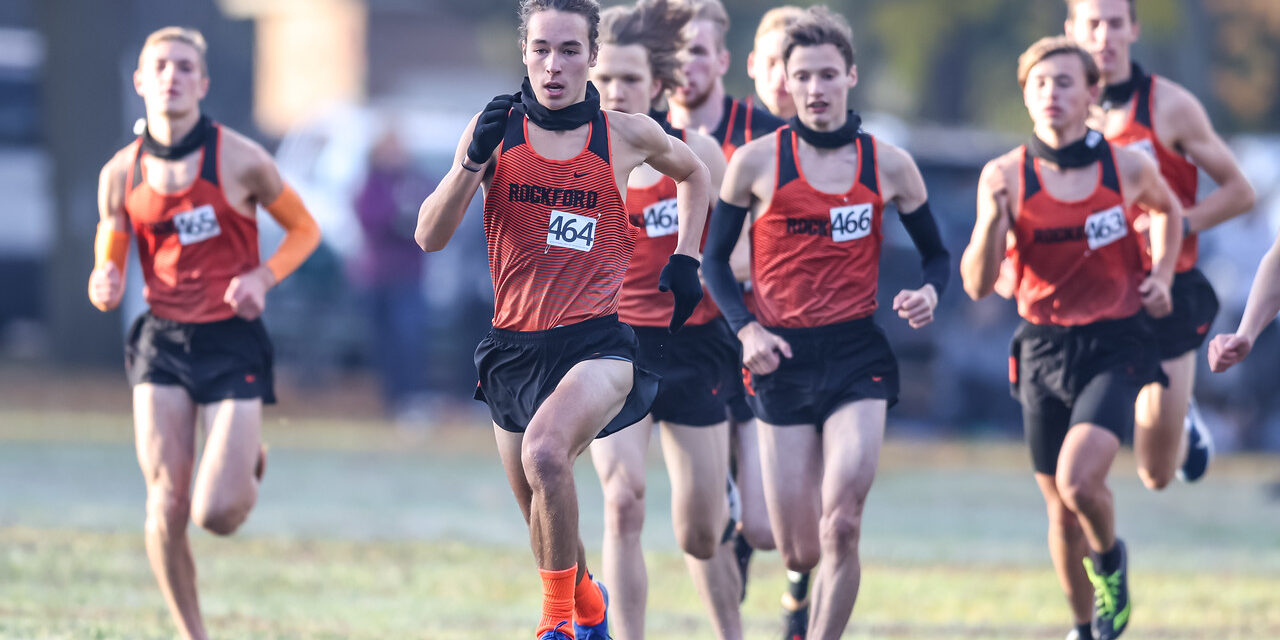 The MHSAA Cross Country Finals are set to take place this week. Area teams and individuals will head to Michigan International Speedway in Brooklyn for the final race of the season. There will be eight champions crowned, four individuals and four teams. Select area coaches gave their thoughts on reaching the State Meet, and their thoughts about that race.

Caledonia’s Boys Cross Country team has been one of the area’s best teams this year. They won the regional meet and are contenders for the State Title. We asked Coach Ben Thompson his thoughts on contending for the title:

“The simple answer is to have our best race of the season.  We have continually performed very well in the biggest meets of the year and tend to be a mentally tough team.  With the way the year has been so different, we have only faced teams on the West side of the State so we haven’t seen teams like Romeo, Traverse City Central, Salem, etc. who are also in contention.  Typically, it takes having 2-3 guys under 16 minutes and the other 2-3 under 16:20 to win a State title.  We feel we have that capability, but so do some of the other teams that will be there.  We have to be mentally ready to run our best race of the season to put ourselves in contention.  It is going to be a very tight race, so every place is going to be important!”

We also asked Coach Thompson about the thriving competition amongst his top runners:

“Our top 7 runners are extremely close.  They are friends inside and outside of cross country.  They do push each other but they are all truly happy when each of them does well.  We only have 1 senior in the top 7 and that group includes some sophomores.  They all work extremely hard and are passionate about the sport.  It has been something that has been building for a few years as we have added runners each year to that top 7.  We also have a strong bond as a team overall, not just our top 7, but  I think they have really bonded over the work put in over the last few years and the friendships made over that time.”

The Fremont Packers have had a great season so far. The boys team won the regionals at Buckley by a 16-72 edge over second place Petoskey. Fremont had the four fastest runners and the sixth and ninth fastest runners as well. Coach Cliff Somers shared a few words about his team prior to the State Meet:

“We are excited to get the chance to compete at the State Meet. With the uncertainty of the season, we have been just taking it one race at a time and being thankful for each day we are able to get in. To be successful, the boys are going to have to close up the time gaps in our 2nd-7th runners.”

The Eagles’ Girls Cross Country team has had a phenomenal year. Coach Kevin Conkel’s team had a thrilling regional race in which they qualified for the State Meet by one point:

“At the regional meet, we had come in with a fourth or fifth ranking. We had been without our #2 runner for the latter half of the season as well.  Our girls showed a total team effort where each of our top 5 runners finished in an amazing pack! Only 10 seconds separated our first and fifth fastest runners.  Elise (Conkel) sealed the deal for us by passing several girls over the last 300m.  Her performance allowed us to qualify by one point.  Talk about an emotional race.  We walked away thinking we did not make it, mostly because no one medaled (in the top 15) and our girls were back a way.”

” This made back to back races (pre-regional and regional) where we did not race to our potential, but by the Grace of God, are moving on.  One more week to showcase what we are capable of. At the State Meet our girls just have to compete like they do in our practices.  The girls have crushed even the hardest practices we have, but they have not allowed themselves to do this on race day.  Our sport is a lot like life, setting goals and figuring out how to accomplish them. Most of the time we are learning more about ourselves then the sport itself.  Our girls need to get out of their own way and avoid being anxious. They just need to have fun and race.”

The Wildcats’ Boys Cross Country team qualified for the State Meet, and Coach Jacci Storey shared the motivation behind their inspired run to MIS:

“Last year, our Cross Country team lost a sophomore teammate (a brother) unexpectedly. Although we won our 2nd conference title, we crumbled at last year’s regional meet because of the amount of emotion, adversity, and grief we faced. Then our track season was cancelled, and we never had our closure, the thought that we all were going to be okay. When we got the approval from the MHSAA to begin conditioning, I knew this year had to be different because of our losses of our teammate and our track season. My goal was to focus on mental strength. We practiced our self-talk and our self-worth. We practiced how to trust each other. We chose to be vulnerable and talk about how we healed and how we have become stronger as an athlete. We practiced our visualization, especially at the end of the Regional course.”

“Friday (at the Regionals), our team applied their mental strength. We came out to the course with confidence, only focusing on the present moment. Our boys ran mentally and physically strong and had terrific kicks at the end of their race, just like we visualized. It has been 16 years since the Jenison Men’s XC team had qualified for a state meet. Looking forward to this Friday (at MIS), I anticipate these athletes have a new level of confidence and our overall rankings will be another upset. In order to be successful, our team will continue our mental strength training and we continue to trust each other on the course.”

The Wildcats’ Girls Cross Country team qualified for the State Meet as well. Coach Kelly Tavis said that her team has been building off last year’s success:

“Last year, we weren’t really on anyone’s radar to qualify as a team, so getting to the State Meet was a huge accomplishment. This year, the expectation was set, even though the season had a lot of ups and downs. The girls have worked so hard and persevered through all of our setbacks to get to this point. Our motto going into the (Regional) race was “Confidence, Composure, and Courage” and I think all seven girls raced with all three. Making it back to the State Meet, this time it’s about taking advantage of every opportunity and giving everything we have to have our best race of the season. We’re definitely peaking at the right time, so I’m very excited to see what the girls do on Friday!”

Ottawa Hills has continued to build a successful program. This year, the Bengals are sending a record nine runners to MIS for the finals. The Girls team will be joined by two individuals. We asked Coach Dan Ebright his thoughts on taking his team to the final meet:

“We are happy to be taking our girl’s team to the state meet for the second time in three years. I believe our top four girls can finish in the top 50, as well as our top 2 boys depending on how well they run. As a program this is the sixth year in a row that we have qualified at least one runner for the state meet.”

The Rockford Rams’ Boys Cross Country team had another strong season under the direction of Coach Andrew Martin. He gave his thoughts on his team this year, and their goals heading into the race at MIS:

“We are excited to make it to the State Finals. We have made it every year since 1995, so this is now our 26th consecutive year of making it. Looking to the State Finals, we would love to perform at a level that we could win. There are many teams that have the potential, and we believe we are one of them. However, given the teams competing and how close we are to each other, we all have a shot. Our goals are to be top 10 as a team at minimum, top 5 would be a great achievement, and a podium finish would really make us happy, putting a seal on a tremendous and unprecedented season. Jude Parks had a big race at the regionals, setting a personal PR and just losing out for the win in a photo finish. He has set himself up to be a top 10 individual at the State Finals as well.”

The Panthers’ Girls Cross Country team has had a strong season. They had a good showing in the regionals, but Coach Kyle Barnes says that the return of their fourth strongest runner at MIS this weekend will boost his team’s performance:

“Before the season we were projected to finish 5th in our region (meaning we would not qualify for the State Championship) which we used as motivation, knowing we were much better than that.  Our team set a goal in the summer to finish Top 5 at the State meet which will be tough but attainable.  Presently we are ranked #2 so we have dreams of getting on the podium (top 2), but we also know the #2-6 teams are only separated by a few points so anything could happen.  Traverse City Central is by far the best team in the state on paper, but I think a few teams, including us, have a path to beat them if we have five runners put together their best race of the season at the State meet.”

Coach Barnes gave some additional keys to his team succeeding at the State Meet:

”For our team to have major success at the State meet our Top 5 girls needs to have a compression (time between our 1st and 5th runner finishing) close to a minute. We have had our best races when we finish close to one minute. Our team philosophy is Shared Suffering which they have bought in to. The idea is basically that we do not race each other, we race girls in different uniforms. We use each other to push one another to levels we couldn’t/would not go without someone else. They’re getting better and better at it and if they fully put it together on Friday, we’ll have a chance to win.”