The Cornerstone Holiday Tournament started on Saturday with a doubleheader of boys basketball. In the first game, Forest Hills Northern took on Flint Powers Catholic. The Huskies won 78-65, and 60 of their points were scored by two players. Ethan Erickson shot 5/9 from three for a 34 point day, and Trinidad Chambliss shot 11/12 from the free throw line on its way to 26 points. Owen Lobsinger led Flint Powers Catholic with 19 points in defeat. In the second game, Kalamazoo Christian knocked down Kent City 57-52. Both Kyle Hoogenboom and Aaron de Jong both had twelve points to lead Kalamazoo Christian in the victory. In the losing effort, Eli Carlson scored 30 points.

The Fighting Scots lost both of their games this week, evening their record at 2-2. They fell to Covenant Christian 65-61 on Tuesday in a close game that went back and forth all day. On Friday night, they fell to South Christian 88-55. Koby Vanderwoude scored 17 points to lead the Scots in a game that they trailed from the opening tip. Caledonia is now off until January 7, when they will take on Middleville.

The H0rnets won their lone game on Friday night against Newaygo. After trailing by three at halftime, Central Montcalm used their inside scoring to take control and earn the victory. Senior captain Gunner Hill led the team with 21 points. Fellow captains Asher Vissman and Trenton Schaffer finished with 17 and 10 points respectively. This week, they will take on Greenville on Friday.

The Rangers earned their first victory of the season when they faced off against East Kentwood on Friday. The Rangers led after the first quarter, and they never looked back. Jimmy Scholler led the Rangers with 21 points, while Mitch Wilkinson added 18. The Rangers’ won the rebound battle 24-17, and they forced a poor shooting night out of East Kentwood from three-point territory (2/13). The Rangers are back in action on January 2 against Allendale in the Cornerstone Tournament.

The Cougars had a tough schedule this week, challenging themselves in two matchups. On Tuesday, they took on Grand Rapids Christian in a road game at the Quest Center. The packed house was treated to a phenomenal back and forth contest between the two teams, in which the Eagles’ Kobe Bufkin scored 29 points to get the 60-54 victory for GRC. In defeat, Grand Rapids Catholic Central was led by Jack Karasinski with nineteen points.

On Saturday, GRCC took to the road again to faceoff against River Rouge. It was another fantastic game that went back and forth all day, before Devon Boyd hit a basket to send the game to overtime. In the extra period, a key three by Jordan Brooks and some clutch free throws by Jace Williams lifted the Cougars to a 63-60 win. Karasinski was the leading scorer again with 21 points. The Cougars are now off until December 27, when they will face off against Northview in the Legends Classic at Aquinas.

The Wildcats split their two games this week. On Tuesday, they struggled to get a stop defensively in a 72-53 defeat against the Wyoming Wolves. On Friday night, they knocked off perennial power Godwin Heights 68-50. After tying the first half, strong play by Kyler VanderJagt (17 points) and Kaden Boucher (16 points) carried the Wildcats to victory. The Wildcats are now off until December 27, when they will face off against Catholic Central in the Legends Classic at Aquinas.

The Rams only played one game this week, taking a Tuesday night road trip to Grand Rapids Union. In a back and forth affair, Rockford was defeated 50-49. The Christmas season is busy for the Rams, as they will play two games at different local colleges. They will first play December 27 against East Grand Rapids in the Legends Classic at Aquinas. Secondly, they will face off against Grand Rapids Christian on January 3 at Cornerstone University.

The Sailors won their lone game to improve to 2-1 on the season. On Friday night, they defeated Caledonia 88-55. Ten players scored for South Christian, paced by Tyler Buwalda who finished with 24. Elliott Grashuis had 17 points, including 15 in the first half. They dominated the glass in this game as well, finishing with 17 offensive rebounds. South Christian is now off until January 7, when they will face Byron Center.

The Vikings split their two games this week. On Wednesday, they struggled to put the ball in the basket in a 57-38 defeat against Morley-Stanwood. The offensive woes were stopped on Friday, as they hung 71 points on Chippewa Hills, a twenty point victory. The Vikings will be back in action on Tuesday January 7 against Lakeview. 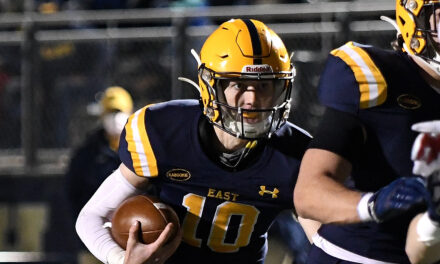