The East Kentwood Falcons needed two wins to qualify for the MHSAA State Playoffs entering Friday night. Hudsonville needed just one victory to qualify for football’s tenth week. After an impressive effort in the first half, Kentwood was able to hold on for a 31-20 victory, inching them one step closer to the postseason.

On the first drive of the game, East Kentwood was able to find the end zone. They took nine plays and covered seventy-four yards, and they capped it off with a one yard run by quarterback Christian Tanner. Hudsonville responded with a seven play, fifty-five yard drive of their own. Sophomore quarterback Ike Irish ran from five yards out to tie this game at seven. On the ensuing drive, the offenses continued to flourish. Tanner tossed a thirty-three yard touchdown pass to give Kentwood a 14-7 first quarter lead.

The second quarter saw East Kentwood take advantage of turnovers, converting them into points. After a Hudsonville fumble, the Falcons started their possession in plus territory. This would lead to a 28 yard field goal by Tanner, pushing the Falcons’ lead to ten. Later in the quarter, another Eagles turnover put East Kentwood in prime position. Josh Ledesma capped off that scoring drive with a one yard run. This gave East Kentwood a 24-7 lead entering the locker room.

Hudsonville started the long road back with a touchdown on their opening drive of the second half. The Eagles went sixty-eight yards, thirty-one of which came on the legs of Ike Irish. He found the end zone for the second time in the game to trim the lead to ten. East Kentwood responded with a scoring drive of their own. Ledesma scored his second touchdown of the evening when he ran fifteen yards to the end zone.

Ike Irish scored his third touchdown of the game when he ran nineteen yards to the end zone with just one second left in the third quarter. This brought Hudsonville back within eleven after the unsuccessful point after try. Neither team scored in the fourth quarter, though Hudsonville made a long drive that ultimately ended up in an interception. Turnovers were a problem in this game for Hudsonville, as they had four of them (three fumbles and one interception).

With the win, East Kentwood moves to 5-3 on the year. They will take on Rockford next week. Hudsonville is also 5-3 this season, and they will face West Ottawa next Friday. Both of these teams have the chance to make the playoffs regardless of their result in Week 9, but a victory would automatically lock up a spot for either one of them. 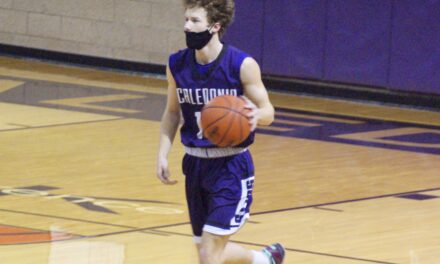 Hudsonville Claws Out Of Early Hole to Top Holt, 2-0 Start on the Year