The Zeeland West Dux had the opportunity to clinch a postseason spot with a victory on Friday night. They wasted zero time in accomplishing this goal, scoring eighteen points in the first quarter en route to a 64-11 victory over the Holland Christian Maroons.

Evan Eding got the party started for Zeeland West when he broke off a fifty-five yard touchdown just ninety seconds into the game. Two minutes later, Chase Peddie extended the lead with a thirty-four yard touchdown run. On their next drive, Peddie was able to run sixty-seven yards through the Maroons’ defense for a touchdown. This gave Zeeland West an 18-0 lead after the first twelve minutes.

In the second quarter, quarterback Carson Gulker got in on the scoring with a fourteen yard run. Five minutes later, he threw for a touchdown. He found Terick DeJonge to push the lead to 34-0. The Maroons got on the board when Jonathan Keizer converted a 26 yard field goal. In the last seconds of the half, Gulker scored his third touchdown on a six yard run. This gave Zeeland West a 42-3 lead heading into the locker room.

Halfway through the fourth quarter, Holland Christian found the end zone for the first time in the game. Zach Dokter‘s one yard run got the Maroons to eleven points in the game. Zeeland West’s CJ Bankhead ran fifty three yards with thirty seconds to play to put the icing on the cake for the Dux. His touchdown gave the Dux their ninth touchdown of the game, and a 64-11 win.

The Dux offense was unstoppable on Friday night. They never punted the ball or committed a turnover. On just 32 plays they racked up 590 total yards of offense. Chase Peddie had eight carries for 204 yards and two touchdowns to lead the rushing attack. Carson Gulker scored three touchdowns (two rushing and one passing) in this victory.

With the win, Zeeland West clinched a playoff berth with a 6-1 record. They will now try to improve their seeding over the next two weeks when they face crosstown rival Zeeland East next Friday and Hamilton in the season finale. Holland Christian slides to 3-4 with the loss. They will need to beat Holland next week and Spring Lake in the finale to have any chance at an at-large bid. 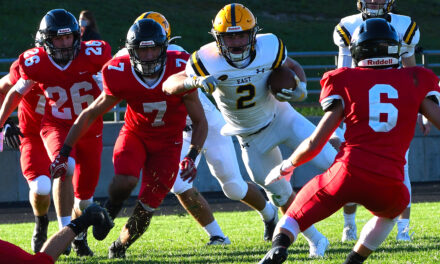