The Rockford Rams have proved that they are one of the area’s best teams with their strong defensive play this season. This week, they took on Mona Shores who has perennially been one of the most athletic and explosive teams in the area. In Coach Ralph Munger’s first game back, the Rams went old school and pounded the ball on the ground. 38 carries and just one completed pass later, Rockford left Mona Shores with a 34-21 victory.

In the first quarter of the game, Jaden Friesen got things started with a four yard touchdown run. Just two minutes later, Mona Shores responded with a 31 yard touchdown run of their own by Brady Rose. This evened the score at seven after the first twelve minutes of action.

Mona Shores took the lead in the second quarter when Tre Hatcher broke off a 19 yard run to the end zone. This lead would last just three minutes. On the last play of the first half, Friesen found the end zone once again when he ran 51 yards through the Sailors’ defense. This caused the two teams to be tied at 14 entering the locker room.

The player of the game without a doubt was Friesen. He hauled 31 carries for 211 yards and five touchdowns. On the Sailors’ side of things, Tre Hatcher led the way with 71 yards on 10 carries. Brady Rose was slightly behind that mark with 67 yards on five carries. 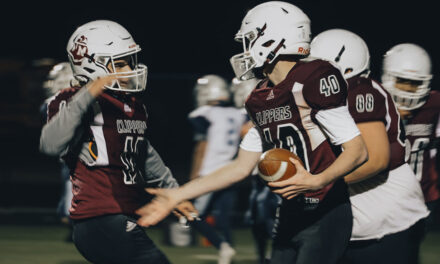 Freeland Claims District Title by Taking Down the Dukes 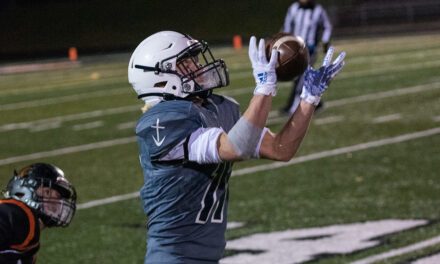