The Hamilton Hawkeyes put on a tremendous defensive display in their Week 1 victory over Godwin Heights. This week, their offense came to play when they took on the Coopersville Broncos. Both of these teams moved the ball up and down the field at ease throughout the entire game. It was the strong third quarter that led Hamilton to win 42-28.

This game started with a first drive touchdown by Coopersville. Joe Keefe went to the air and connected with Colton Bosch for a 15 yard touchdown to give the Broncos a 7-0 lead. They would extend their lead to 14 when Keef found Owen Syrek for another 15 yard touchdown strike, giving Coopersville a 14-0 advantage. Before the first quarter was over, Hamilton found the end zone on a run by Quntin Soerens. This left the score at 14-7 after the first quarter of play.

Early in the second quarter, Hamilton tied the score at 14 when Marcus Mcillwain ran 48 yards to the end zone. The tie score only lasted a minute of game play before Keefe and Syrek connected on a 65 yard touchdown play to put Coopersville back up 7. It was a phenomenal night for Syrek, who had 10 catches for 184 yards and two touchdowns. They would expand their lead to 14 points on Keefe’s fourth touchdown of the half, this time he used his legs from 10 yards out. Before the half ended, Hamilton found the end zone one more time on a 35 yard play to trim the Coopersville lead to seven, 28-21, at halftime.

Hamilton took the lead in the third quarter by scoring both of the touchdowns in the twelve minute period. First it was Mcillwain, who ran it in from ten yards out to tie the game at 28. Just forty seconds of game time later, the Hawkeyes took the lead on a ten yard run by Tyler Stezowski. The failed extra point left it at 34-28 entering the final quarter of play.

In the fourth quarter, Hamilton continued their unanswered run with one more touchdown by Stezowski and a two-point conversion. This would lead to their eventual 42-28 victory. At 2-0, Hamilton will start OK Green play next week against Byron Center. Coopersville, 0-2 on the season, will have another tough test next week against Allendale. 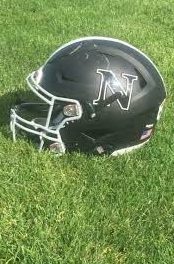