The Allendale Falcons took a tough defeat in their season opener against Unity Christian last week. They hit the road in Week 2 to take on Greenville, another team who was hoping to put their Week 1 loss behind them and record their first win of 2019. Thanks in part to the tone set on the game’s first play, Allendale took control of Friday night’s game. This allowed them to leave Legacy Field with the 44-24 victory.

On the opening kickoff, Sabastian Wells made an explosive play and weaved his way through the kickoff team for 83 yards, reaching the end zone. Owen Burk‘s two-point conversion run gave Allendale the early 8-0 advantage just twelve seconds into the game. It was successful for Greenville early in this one as well, when they moved the ball all the way into the red zone. This would lead to a 29 yard field goal by Derek Holmberg to move the score to 8-3.

Allendale would score two more touchdowns before the first quarter ended. On the first of these two drives, it would be Burk once again. He ran ten yards for the touchdown, and then he tossed the two-point conversion to Sabastian Wells. Three minutes later, Adam Hotovy aired the ball out and connected with Burk for a 55 yard touchdown. The extra point by Kaiden Anderson made it 23-3 Allendale after the first quarter.

In the second quarter, each team had one scoring drive. First it was Greenville, who scored on a big play of their own when Grant Thwaites connected with Zane Bigelow for a 51 yard touchdown. Later in the quarter, Owen Burk scored his third touchdown of the half when he plunged it in from a yard out to bring the lead back to twenty points at 30-10 entering the locker room.

The lone touchdown in the third quarter was scored by Allendale’s Adam Hotovy. His twenty yard run pushed the Falcons ahead by 27 points entering the final frame. Greenville started the scoring in the fourth quarter with a 27 yard run by Holmberg. Just twelve seconds later, Owen Burk got his fourth touchdown of the night on a 65 yard run to extend Allendale’s lead back to 27 points. Thwaites’ second touchdown of the night ran for 21 yards before the night was over cut the lead to 44-24.

This was an impressive night of offense despite losing for Greenville. They tallied up 357 yards and 24 points, both extreme improvements from last week’s game against South Christian. Grant Thwaites led the way with 177 yards passing and 124 yards rushing, as well as two total touchdowns. Zane Bigelow was the leading receiver with 137 yards for the Yellowjackets.

Grand Rapids Christian’s Post Presence Too Much For Kalamazoo Central 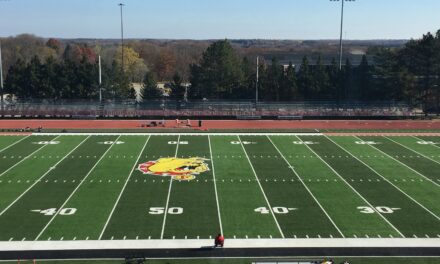