The Unity Christian Crusaders reached the playoffs for the fifth straight season this year, but for the first time this season they were placed in Division 5. This meant that they would avoid Grand Rapids Catholic Central, who had knocked them out in each of the past two seasons. Though their route had been daunting, including knocking off five-time defending champion West Catholic, the Crusaders had been very impressive this postseason.

This week, they were set to take on Saginaw Swan Valley, who entered the game with a 12-0 record. The Vikings had finished as the runner-up last season, and they had a return trip to Ford Field on their mind. In a defensive battle, a couple of turnovers forced mistakes from Swan Valley late and Unity will advance to the State Championship game.

The defenses on both sides started out strong and pitched scoreless first quarters. The Crusaders started the scoring when Isaac TeSlaa connected with TJ VanKoevering for a 34 yard touchdown. The extra point extended their lead to 7-0. On their ensuing drive, Swan Valley responded with a 50 yard pass to move the ball deep into Crusaders’ territory. Chase Mendoza tied the game up when he found the end zone from two-yards out.

On the last drive of the second quarter, Unity Christian responded with a scoring drive. Max Buikema broke off a thirty yard run, and Unity was in the red zone. TeSlaa would rush for two yards and find the end zone. This would give the Crusaders a 14-7 lead heading into the locker room.

After neither team scored in the third quarter, these teams remained in a 14-7 battle heading into the final frame. Swan Valley’s offense had the first scoring opportunity midway thru the fourth, as they reached the 19 yard line of Unity Christian. The defense for the Crusaders made a huge stop as they forced and recovered a fumble.

On their next drive, Swan Valley continued to move back down the field. They moved the football all the way to the Unity Christian 20 yard line, with another chance to tie the score. But for the second straight drive, the Unity defense made a huge play. TJ Van Koevering intercepted the ball, and they sealed the deal.

With the 14-7 win, Unity Christian advances to Ford Field and the Division 5 State Championship game for the first time ever. They will take on Portland in championship game on Saturday afternoon. They will kick off the game at 4:30 PM. This game will be available on Michigan Sports Radio and on Fox Sports. 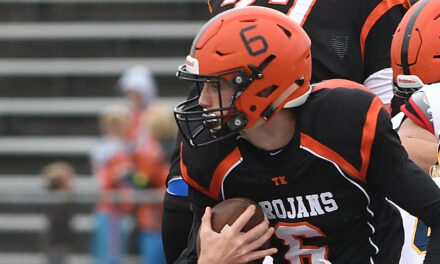