It seems like yesterday that teams across the great state of Michigan were strapping on the pads for the first practice of early August. In a blink of an eye, the teams have already reached the final weekend of the regular season. For most seniors, this is the last game of their career. For others, it is a vital game to make the postseason push. Michigan Sports Radio will have this week covered in its entirety, with previews of our games below:

The Rams have turned things around in the second half of their season, winning their last four games to put themselves in strong position to reach the playoffs. Though they will probably get in with just five wins, they can officially clinch a playoff berth with a victory over the Falcons. More importantly, the OK Red Championship is on the line in this one. The Falcons will win the league title outright with a win, but a Rams victory would leave the two teams as co-champions. East Kentwood has won seven straight games after their season-opening defeat to Mona Shores. Their defense has held four of their seven victories to seven points or fewer, while their offense has averaged 50 points per game this season. Last year, Rockford won their second straight in this series with a 24-10 victory.

Though the Greenville season will end after this week, the Yellowjackets have the opportunity to play spoiler in their season finale. The Rangers of FHC are 4-4, but Snooze2You currently has them sitting on the right side of the playoff bubble. As the experts would say however, there has never been a 4-5 team in the playoffs regardless of their playoff point total, so the Rangers need to take care of business against Greenville. Two years ago, Greenville got a late victory over FHC 35-34, but the Rangers responded with a 42-7 win last year.

Another possible spoiler opportunity will take place in the OK Blue when Coopersville squares up against West Catholic. The five-time defending Division 5 Champion Falcons find themselves in need of a Week 9 win over the Broncos to put themselves in contention for an at-large bid. Coopersville has struggled this season, but their offense exploded for 62 points last week in a win over Fruitport. If their offense, led by Cayden Schneider, can match that output this week, they would be in great position to get their first ever win over West Catholic in their tenth try. In addition to the playoffs, the Falcons also have an outside shot at sharing the OK Blue title if they win and Catholic Central gets upset by Comstock Park.

The Eagles are another team that is sitting in a strong position for an at-large bid to the playoffs, but they can clinch their postseason bid with a Friday night win against West Ottawa. The Eagles started this season 4-0, but their offense has struggled in the last four games, averaging only 9.5 points per game. They will need far more than this average to beat the Panthers, who are averaging just under 36 points per contest. Last fall, West Ottawa snapped a five-game losing streak in this series with a 20-7 victory.

Another potential playoff spot and conference title are in play for the Pioneers as they take on Wyoming. Though they comfortably sit in the playoff picture with five wins, it would take large amounts of stress off of Coach Casey Longo’s shoulders if the Pioneers got to the postseason automatically by beating the Wolves on Friday night. The Wolves have struggled this season, though their offensive production the last three games has been very strong. After three single digit performances in the first five games, Wyoming has averaged 27.3 points in the last three weeks. The Pioneers still have a shot at sharing the OK Gold title with GR Christian as well, as they are currently tied. A win will accomplish two huge feats for the Pioneers on Friday night. In the two meetings since these teams joined the OK Gold, East won both by a combined score of 81-14. The Pioneers have always had success historically against Wyoming, as they beat the former schools (Wyoming Park and Wyoming Rogers) 44 out of 49 games.

The Newaygo Lions won five consecutive games before falling last week to Reed City. This win streak leaves them just one win away from their second straight trip to the postseason. Though they have a large amount of playoff points, they will try to clinch their spot with a win over the Crusades of Muskegon Catholic Central. It is a down season for MCC, as for just the second time since 2004 they will wrap up their season in Week 9. These two schools have never met in their history on the gridiron.

The Eagles suffered their first defeat last week, a 14-7 defensive battle against undefeated Lake City. The CSAA-Silver Champions will look to regain some momentum heading into the postseason as they wrap up regular season action against the Tigers of Grant. At 4-4, Grant still has an outside shot at the playoffs, though they are going to need some help with their current situation of playoff points. These two schools have frequently met throughout the years, but the most recent meeting came back in 2002. The Tigers pulled out a 7-6 victory back in that game.

Similar to Grant, the Vikings still have a shot at the postseason, but they are going to need some help in addition to a victory over Holton this Friday. The Red Devils are no easy foe, as they are also looking to lock up a playoff berth with a record of 5-3 entering this one. Tri-County hasn’t reached the playoffs since 2004, while Holton has been absent since 2007. These two are frequent foes over the years, once both members of the WWAC-Rivers Conference. In their last year in that league (2005), Tri-County got a 50-44 victory over Holton.

After a strong 5-1 start, two tough losses have left Freeland one win shy of clinching their eleventh straight playoff berth. If they want to control their own fate instead of leaving it up to the computers, they will need to defeat Frankenmuth who enters this one at 7-1 on the year. There are four common opponents this year, and the results have varied. Both teams lost to Swan Valley, and they also both defeated Carrollton and Bullock Creek. The difference in results was against Birch Run. Freeland lost 35-12 last week, but Frankenmuth defeated the Panthers 28-0 in Week 4. Last year, Frankenmuth won this one by a 20-7 score.

Rockford’s Parker Ehinger drafted in 4th round by Chiefs 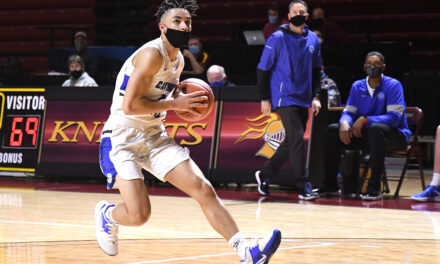