The East Grand Rapids Pioneers and Middleville Trojans both entered Friday night with a chance to take the lead in the OK Gold. A strong ground game, five rushing touchdowns by the Pioneers, was enough for East Grand Rapids to emerge victorious with a 33-13 score.

After a scoreless first quarter, John Shelton broke the tie with a two-yard touchdown run. The Trojans responded with a seventy-three yard pass from Cole Schoobridge to Colson Brummel to even the score at seven. In the last five minutes of the first half, East Grand Rapids scored a pair of rushing touchdowns. Jalen Broussard broke a 57-yard touchdown, and then just before the half Nate Milanowski scored from twelve yards out to extend the lead to 20-7.

The third quarter saw these two teams swap touchdowns as John Shelton and Schoobridge each used their legs to find the end zone. The fourth quarter’s only touchdown was Shelton’s third of the game from three yards out to seal the 33-13 win.

East Grand Rapids only threw nine passes in the game, but they had 36 carries on the ground. John Shelton took the bulk of the work load with a 19 carry, 119 yard, 3 touchdown game. Jalen Broussard logged the most yards with his nine carry, 138 yard performance.

In the loss, Middleville saw a good performance from quarterback Cole Schoobridge, who finished 1/4 passing for 73 yards and a touchdown, he also rushed for a score from two yards out. Dylan Podbevsek also had a strong night on the ground as he had 13 carries for 75 yards.

With the win, East Grand Rapids advances to 5-2 on the season and 3-0 in the OK Gold. Next week, they have a vital game against Grand Rapids Christian to determine the OK Gold Championship. For Middleville, they are 5-2 on the year as well. They need to defeat either South Christian next week or Ottawa Hills in Week 9 to clinch a playoff bid. 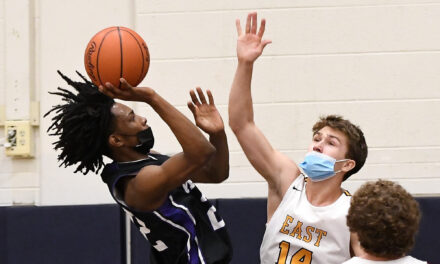