The MHSAA Playoffs have reached the Regional Final rounds, as there are now just eight teams remaining in each of the eight divisions in the 11-man playoffs. There are 32 games across the state of Michigan this weekend, and the Michigan Sports Radio team of broadcasters are going to be LIVE at four of them. In addition to tomorrow’s preview show, available on the MSR Facebook page, a quick preview of the games can be found below.

The Hornets of Williamston are making the longest trek of any team on Friday night as they will drive over 400 miles to the Upper Peninsula to take on the Eskymos in the Division 4 Regional Finals. The Hornets enter this one at 7-4, while Escanaba is 9-2. A complete preview of this game can be found here.

The Rangers of Forest Hills Central continue their pursuit of the Division 2 Championship on Friday night when they host the Trojans of Traverse City Central. FHC has won all 11 of their games this season, by an average of 26 points per game. Their dynamic offense has scored at least 28 points in every game this season. After winning the OK White in the regular season, they started their playoff run with a 40-14 win over Mattawan. Last week, they defeated Mona Shores 28-21 in a very competitive football game. The Rangers are looking for their third ever trip to the semifinals, and their first since 1995 when they lost in the Class A Semifinals

Traverse City Central will enter this contest at 8-3 on the year. Their offense has also been able to score with ease this season, averaging 34.6 points per contest. Their playoff run started two weeks ago with a 21-13 win over Midland. Last week, they surprised many football fans across the state by knocking off crosstown rival Traverse City West 17-14 to advance to this week’s regionals. The Trojans are aiming to return to the semifinals for the sixth time ever, the first since 1988 when they won the Class A State Championship.

This is the fifth all-time meeting between the two programs, but the first in the postseason. These two programs played four straight years in the regular season between 2007-2010. The Rangers won three of the four meetings, walking away victorious in 2007, 2008 and 2010.

In Division 5, the four-time reigning Division 5 Champion Falcons of West Catholic will hit the road to try to claim their eighth straight regional title. They have had a strong team on both sides of the ball so far in 2017, averaging 41 points per game. On defense, they also have played at an elite level, posting four shutouts. After losing their season opener, West Catholic has won nine of their final ten games. Their playoff run started two weeks ago in a 43-13 win over Berrien Springs. Last week, they won the district title by shutting out Kalamazoo United 42-0.

Their opponent, Portland, comes in winners of nine straight games. They won the CAAC-White this fall with a perfect league record, and their defense has been even more successful than West Catholic. They have allowed an average of 8.8 points per game, and they have posted four shutouts in the last five games. This streak includes a shutout in both of their postseason contests so far. They blanked Ovid-Elsie 16-0 in the first round, and claimed a district title with a 35-0 win over Lansing Catholic. The Red Raiders are looking for their first regional title since 2012, when they won the Division 5 State Championship (over West Catholic).

In the Division 6 Playoffs, Jackson Lumen Christi will hit the road to take on Watervilet. The Titans enter this one at 9-1, and reigning champions in Division 6. They scored 37.1 points per game this season, while only yielding 11.9. In the first round of the playoffs, they defeated Quincy 48-15. Last week, they had no problem in beating Michigan Center 57-14. They are looking for their sixteenth regional championship in program history with a road win on Saturday.

Watervilet enters this one undefeated, posting an 11-0 record so far. Their offense is the most explosive in the state, as they average 52 points per game. They have scored at least 36 points in all eleven of their games, a higher total than most teams average. In the first round of the playoffs, the SAC-Valley champs started their journey with a 36-0 win over Schoolcraft. Last week, they got in a shootout with Delton Kellogg, emerging as 58-50 winners. They are looking for their second ever regional title, their first since 1979 when they ended the season losing in the Class C Championship game.

Last year was the first time that these two programs ever met, as they squared off in the first round of the playoffs. The Titans had little trouble in that one, winning 55-28 en route to winning the Division 6 State Championship. 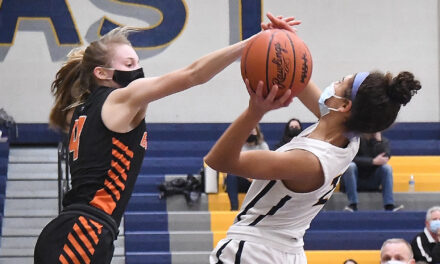