The high school playoffs, much like playoffs at a higher level, are truly a competition of the state’s best teams. While there are some teams that are on paper superior to others, the underdogs just need one good night on the field to walk out of the opponent’s stadium with a win. In a fantastic football game just off Reeds Lake on Friday night, that was exactly what happened, as the Red Hawks of Cedar Springs upset East Grand Rapids, ranked #2 in the Remax-United Power Poll, 41-40.

Despite being two teams that featured stout defenses throughout the season, the offense on both sides flashed their ability early and often in this one. Under two minutes into the game, Cedar Springs got on the board as Ryan Ringler scored from three yards out, and he also converted on the two-point try to put the Red Hawks in front 8-0. A few plays into the Pioneers’ first drive, their completed pass was fumbled and recovered by Cedar Springs in plus territory. They capitalized on the turnover on a three yard run by Darius Barnett, and when they failed on the two-point try, the score sat at 14-0.

On the ensuing Pioneer drive, Mike Malewitz took control offensively, and he hit Jack Billo on a twenty-two yard pass. The extra point was blocked, and Cedar Springs still led by eight. Just eighteen seconds later, Cedar Springs would respond as Ryan Ringler found the end zone for the second time on the night, expanding the lead back out to 21-6.

It took East Grand Rapids just twenty-eight seconds to respond with a touchdown of their own as Connor Davis punched it in from nine yards out. The extra point snap was errant, and the Pioneers second unsuccessful conversion left them back 21-12. The sixth and final touchdown of the first quarter came on the legs of Darius Barnett, his second, as he punched it in from fifteen yards. Once again, a conversion was failed, and Cedar held the 27-12 advantage.

In the second quarter, the offense began to slow down. The first touchdown came at the 5:20 mark as Malewitz hit Nick Malinowski on a 45 yard touchdown pass. Malewitz tossed a successful two-point conversion to Ben Forstner, and the Pioneers were within seven. Cedar Springs would respond three minutes later as John Todd was able to break through the Pioneer defense for a fourteen yard touchdown run. Their two-point try was unsuccessful, and their lead sat at 33-20. With just over a minute until halftime, Malewitz used his arm for the third touchdown of the night, finding Connor Davis for a 25-yard strike to bring East within five points as they headed to the locker room.

Early in the third quarter, the Pioneers took their first lead of the night as Connor Davis scored his third touchdown of the night, an eight yard run. For the third time in the game however, East failed to convert an extra point, leaving their lead at just one point, 34-33. At the 2:32 mark of the third quarter, Cedar Springs regained the lead as quarterback Nick Campione ran it in from twelve yards out. More importantly, Campione found Ringler for the two-point conversion, increasing the Red Hawks lead to 41-34.

With 7:18 left in the fourth quarter, East Grand Rapids once again scored a touchdown, a twenty-five yard strike from Malewitz. Coach Casey Longo and the Pioneers lined up for the two-point conversion, a controversial call in some people’s eyes. Given the touchdown frequencies, and the extra point woes earlier in the game, the decision to line up for a two-point conversion can be very easily justified. Malewitz’s pass to Jalen Broussard was incomplete, and Cedar Springs held on to a 41-40 lead.

The Pioneers would get the ball back late in the fourth, but Malewitz’s pass would be intercepted by Nick Campione. The Red Hawks would hold on in this one, advancing to next week’s district finals. 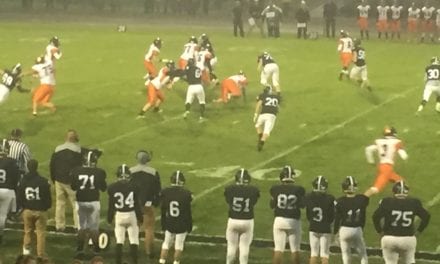