Neither team scored in the game’s first quarter, but the offense began to pick up in the second quarter. With 9:24 left in the second quarter, Riley Johnson ran it in from four yards to put Coopersville 7-0. Just over three minutes later, he would run it in again from four yards to double their lead to fourteen points. This lead would be trimmed to six points at the break after Eli Maes broke a 37-yard run and they also converted a two-point try.

In the third quarter, Riley Johnson hit Brayden Wright for a nine-yard touchdown strike. This would be matched at the four-minute mark of the third quarter as Dameion Webb rushed it in for a five-yard run, trimming the lead back to 21-14.

With just 1:29 left in the game, Riley Johnson scampered for his fourth touchdown of the game (third running) as he gained all eleven necessary yards. This would be enough for Coopersville, as they held on for a fourteen point win. With the victory, Coopersville now sits at 6-2 on the season, qualifying for the playoffs. They wrap up regular season play against Catholic Central next week. For Holland, they currently sit at 5-3, one win short of the postseason qualifications, and next week they take on Holland Christian. 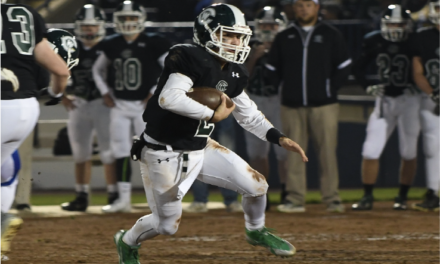