Grand Ledge’s Strong Second Half Leads to Win over Hudsonville

The Hudsonville Eagles opened their 2017 campaign on the road Thursday night when they travelled to take on the Comets of Grand Ledge. Last year, the Eagles rode the legs of senior running back Dalton Agers to a 21-14 win. This year, a young Hudsonville team struggled in their season opener, a 41-14 defeat.

In the first quarter, Sam Baine opened the scoring column on both sides when he scored from a yard out. This gave Hudsonville an early 7-0 advantage. The only other touchdown before the teams returned to the locker room for halftime was a 65-yard deep pass for the Comets, evening the score at seven.

The final three minutes of the third quarter and the first six minutes of the fourth quarter did the Eagles in, as the Comets scored four times. Nate Umholtz found the endzone twice, both from two yards or closer in this stretch, and the other two scores were passes off the arm of Bird, who finished with three touchdown tosses.

Next week, the Eagles will try to bounce back as they host the Rams of Holt. Last year, the Eagles beat the Rams, who are coming off of a Week 1 loss to Grandville. 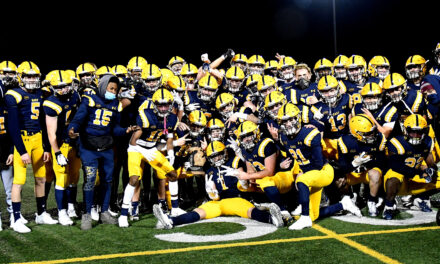